College Football Playoff Solution, by A Sip of Sports

Nobody is happy with how college football crowns their National Champion. Has it gotten better since we left the BCS and went to a four-team playoff system? Yes. Has an only 4-team system solved the problem? Absolutely not.

As it is today, to get in the playoffs one must be a Power 5 Conference, and even then, one of those Conferences will be left out (PAC-12, again). If there are two good teams from the same conference, the committee has to make the decision between rewarding two good teams in the same conference or kicking another Power 5 Conference out (Can I hear some Ohio State and Big Ten moans?). If one is outside of the Power 5, there is no chance to get in (ask the undefeated UCF).

It is systematically unfair. At the beginning of the season there were only a handful of teams that have a chance to play for the title. Most college football programs in September have no chance.

The argument continues today with who should have been in, Alabama or Ohio State. Who has the better record, and who has the better wins? Does winning the Conference Title even matter? Our system gives credence to all of those issues and gives each the chance to play for the National Title.

The biggest obstacles facing change is the history and prestige of the Bowl System. There is a lot of money tied up in bowls, and to cut them off is going to be nearly impossible. My system includes most of the bowls while adding national importance to some of the more minor bowls.

Here is our solution at A Sip of Sports:

All Conference Champions will automatically reach the play-off. Instead of doing 5 weeks of Bowl games, we would have a 5-week playoff as follows, 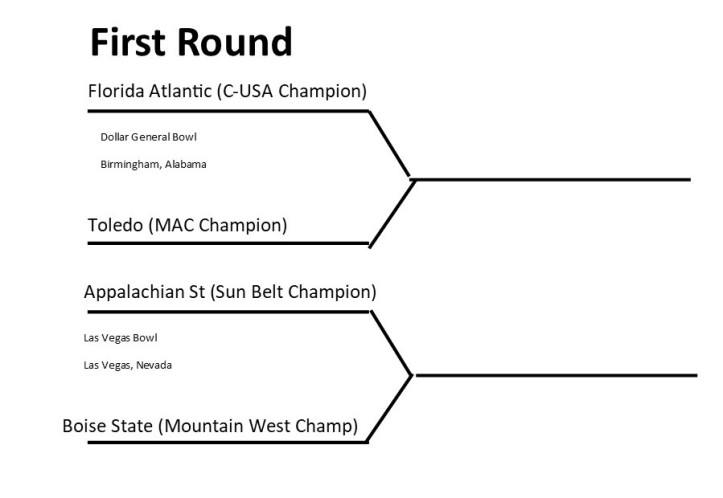 1st Round of Playoffs would be the second week of December following the crowning of Conference Champions. The 1st round would be for the 4 weakest conferences playing each other.

The winners of Round 1 would join the American Athletic Conference Champion and 3 at-large-bids in the Second Round. The At-large-bids would go to Independent programs (Notre Dame, BYU for example) or any Power 5 conference teams that did not win their Conference.  These 6 teams would play each other by seeding based on the end of the season rankings. Bowls that would be included would be the Military Bowl (Annapolis, Maryland), Liberty Bowl (Memphis, TN) and Holiday Bowl (San Diego, California).

Example from this year:

The Rankings for this week would be

#1 Alabama would play #6 Winner of FAC/Toledo in the Holiday Bowl (San Diego, California)

#3 Auburn would play #4 UCF in the Military Bowl (Annapolis, Maryland)

The 3rd Round would be the Major Bowls. It would have the winners of Round 2 with all the Power 5 Conference Champions. The Rose Bowl (Pasadena, California) would hold its historic prestige by pitting the PAC-12 Champion against the BIG 10 Champion. The Sugar Bowl (New Orleans, Louisiana) would still host the SEC Champion against the winner of the Liberty Bowl. The Cotton Bowl (Dallas, Texas) would have the Big 12 Champion against the Holiday Bowl Winner. The ACC Champion would face off against the Military Bowl winner in the Orange Bowl (Miami, Florida). All these games would play back-to-back on New Year’s Day. The great tradition of college football would be back with every game mattering to play in the Championship.

Example from the year:

The Sugar Bowl would pit Georgia (SEC Champion) against the Liberty Bowl winner.

In the Orange Bowl, Clemson (ACC Champion) would play the winner of the Military Bowl.

Fourth Round and Championship

Only 4 teams would remain after a great New Year’s Day of Bowl Games, all of them mattering. The Fourth Round would be the Fiesta Bowl (Phoenix, Arizona) hosting the Rose Bowl and Cotton Bowl winners. The Peach Bowl (Atlanta, Georgia) would play the Orange and Sugar Bowl winners. The Championship Game would be the following week.