Nothing has changed since the introduction of College Football Playoff

Alabama plays Georgia tonight in a game touted as “The National Championship Game”. It’s especially insulting that Alabama is in. Good grief they did not even win the Western Division of the SEC. Alabama and the SEC were rewarded because Alabama lost out to Auburn in the SEC West. Alabama was able to avoid playing the SEC Championship, which allowed the SEC to have two teams in the 4-team tournament. Completely fair, right?

Since over half the schools have no chance to win the Championship no matter what they do in the regular season, will they please stop calling it a National Championship. Just ask Utah, Boise State, TCU, all teams that have gone undefeated, won their Major Bowl Games, but weren’t allowed to compete for the National Championships. But teams like Alabama and Ohio State get in without even winning their conference.

Let’s look at the history of the joke that has been made out of the “National Championship” in college football. 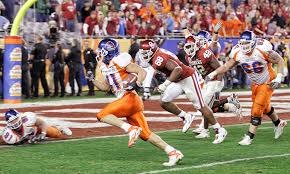 The very next year 2008, Mountain West Champion Utah (12-0) faced Alabama in the Sugar Bowl, routed them 31-17 to finish 13-0, the only undefeated team. Florida, with one loss, won the BCS Title Game. Is Florida the obvious National Champion? Utah never had a chance.

Again in 2010, WAC Champion Boise State (13-0) faced Mountain West Champion TCU, also undefeated, in the Fiesta Bowl. Boise again won 17-10 to finish 14-0. Coincidentally Alabama also finished 14-0 after defeating Texas in the BCS Title Game. I know, Boise State would have been crushed by Alabama. Just like you know the Patriots could not come back and win a Super Bowl behind 21-3 at half.

The next year in 2011, again the Mountain West Champion TCU (12-0) faced Big 10 Champion Wisconsin in the Rose Bowl and beat them 21-19 to finish 13-0. The BCS Champion was the undefeated Auburn who beat Oregon in the BCS Championship Game. We’ll never know how TCU would have fared against Auburn, they never had the opportunity. Only in the college football is one undefeated team obviously better than another undefeated team they should not even have to play each other.

They said they had solved the problem when they went to a 4-game College Playoff System. But it’s not solved. It’s all still the same. Let us look at this year’s situation. UCF, undefeated, winner of the American Athletic Conference and winner of the January 1st Peach Bowl, sits at 13-0. The only undefeated team in Division One Football. Meanwhile, Alabama (which didn’t even win their division in their conference) will play Georgia (a legitimate contender) for the “National Championship”. What do these two teams have in common? They both lost to Auburn! Who did undefeated UCF beat in the Peach Bowl? Well it was…Auburn.

If I had a vote, I would vote UCF Number 1. Not because I think they are the best team, but because I believe they are the most deserving team. I don’t know who the best team is, they don’t getting the opportunity to prove it on the field. The winner in college football is decided in a room full of “experts” and not on a football field. No wonder college football is struggling with ratings.  Would UCF defeat Alabama or Georgia? I have no idea. I do know that in most of the previous situation sited: Boise State vs Oklahoma (2007), Utah vs Alabama (2008), TCU vs Wisconsin (2011), the experts believed the winners had no chance. Monday’s Game is not a National Championship Game and I wish they would quit calling it that. It is flat out dishonest!