We’re a week into the Australian Open. Who made it to the second week, why is the second week such a big deal? How are the American’s doing? And who is looking the best to win?

Overview of the Australian Open

The Australian Open is the first major of the year held in Melbourne, Australia. It is generally deemed the weakest of the four Tennis Majors (the other three being the French Open, Wimbledon and the U.S. Open). The Australian Open has over 700,000 fans over the course of it’s 2 weeks, the largest sporting event in the country.

The Majors admit 128 players in the singles division for each gender. This extends the event over two weeks, longer than most other tennis tournaments. Because of the expanded field and the high pay out, the Majors garner the best of the sport.  Another difference with the Majors, on the Men’s side, is it is best 3 out of 5 sets. Most tournaments play best 2 out of 3. The women still play best 2 out of 3 even in the Majors.

There is a single men’s draw, singles women’s, doubles men, doubles women and a mixed doubles draw in the tournament. There is also a junior’s division for all of those as well.

The Australian Open, like the U.S. Open, is played on a hard court. This is the most common type of court in the United States. Hard courts are generally the fastest of the 3 surfaces (grass and clay being the other two).  There is no dress code for the Australian Open.

Novak Djokavic of Serbia has won the most Australian Opens of any man with six.

Margaret Court, of Australian, has won more women’s singles titles than anyone else at eleven. 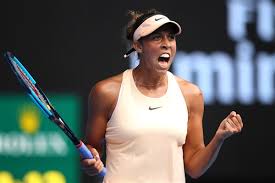 But there have been some American bright spots. Going into the Quarterfinals the best woman in the draw is American Madison Keys. She has yet to drop a set this tournament and has handled all her opponents with ease. The rest of the top contenders in the women’s bracket have all struggled with tough 3 set matches. She plays Angelique Kerber in the Semifinals, who is coming off a thrilling 3 set victory over Su-Wei Hsieh.

Another shocking bright spot is American Tennys Sandgren. He is the last remaining American male in the tournament and the first American man to make it to the Quarters in the Australian Open since Andy Roddick did 8 years ago. Never heard of Sandgren, neither had anyone else. Sandgren has beat some good players on this Cinderella tournament. He had never won a match in a Major before this run. He only had a handful of ATP match wins. He’s ranked 97th in the world, but he is thrilling tennis fans this year.

Roger Federer and Rafael Nadal are still the cream of the crop on the men’s side. Federer has not lost a set and has handled his business with finesse. Nadal had trouble in the Round of 16 against the Argentine Diego Schwartzman but was able to finish him off in 4 sets. He takes on Marin Cilic who has won a Major. Federer will play against Tomas Berdych in the Quarterfinals. Both will come into the match rested. Berdych has made multiple Major Semifinals and appeared in the 2010 Wimbledon Final where he lost to Rafael Nadal. The winning-est Australian Open male, Novak Djokavic lost in the Round of 16. He is just coming back from 6 months off for injuries.

For a complete look at the men’s bracket click here.

For a complete look at the women’s bracket click here.