Gymnastics Scandal: How far and how deep does it go?

A crisis is happening in women’s sports. Larry Nassar, the former USA Gymnastics and Michigan State team doctor, was found guilty of molesting girls in his care as an athletic doctor. There are a lot of questions and a lot of accusations being leveled. How was this allowed to continue? Who was at fault and who should lose their jobs?

Here I’ve tried to make sense of it all. Those being blamed on the USA Gymnastics side and on the Michigan State side. Also, there is a list of the multiple investigations occurring, not including the journalistic investigations. Finally, I provide a timeline for what has happened.

My overall opinion is this is a tragedy. This was a pervert who preyed on the innocent and the willfully naive. He used his station and reputation to give him access and deniability. For too long, too many people let uncomfortable accusations go. Too many people allowed his medical position to make him untouchable and no one asked tough questions or relied on the judgement of the victims. But we also have to understand, Nassar was good. He was not sloppy and he hedged his bet on his own reputation. He was able to trick not just young girls but adults.

Bela and Marta Karolyi have taken USA gymnastics to the world front runner. They were the coaches of the great Romanian Nadia Comaneci who was the first gymnast to earn a perfect score in Olympic competition. After defecting to the United States, they turned their undeniable talent on American’s like Mary Lou Renton. Bela is famous for carrying his athlete, Kerri Strung, to the medal stand to accept her Gold Medal after breaking her foot on her first vault.

The Karolyi’s are the name and reason for USA gymnastic greatness over the last 20 years. Their ranch in Texas has been where every American hopeful must pass through. It is also here that Larry Nassar abused many women under the guise of medical treatment.

There are some who are saying the Karolyi’s knowingly looked the other way when it comes to Nassar. A lawsuit states, “(their ranch) created a toxic environment” that allowed Nassar to prey.  At this point I am not willing to go that far.

Gymnastics is one of the most demanding sports. Especially on the women’s side it is demanding of those in their teens and early twenties. The Karolyi’s have developed greatness but not through soft words and encouragement. They have their own style that is harsh and out of step with how coaching is expected to be now. Think, Bill Belichik and Bobby Knight. They demand the best and they have the results to prove their tactics.

Do I think they were complicit, no. Do I think they suspected? Yes. What is so disturbing about what Nassar did was he did it all under the guise of “Medical Treatment”. I think they thought he was doing his job and they could not draw the lines between his job and his wrong impulses.

The Karolyi’s have disappeared from USA Gymnastics. Is their lack of oversight enough to completely cut ties, it seems so.  The Texas Rangers are now looking into the activities at the camp more closely. We will probably know more in the coming weeks.

At this point I am not willing to say the Karolyi’s did anything overtly wrong. Their coaching techniques are strict but nothing illegal. But if parents cannot trust their kids with the coaches, the coaches need to go. These coaches were not taking full care of the athletes in their charge, they should be held responsible for that.

Geddert who has claimed to be a friend of Nassar was suspended after four members of the 2012 Olympic Team said they were molested by Nassar.

Geddert trained his kids at the Karolyi Ranch and had much more contact with the athletes and more direct oversight over Nassar. His complacency or lack of knowledge is disturbing.

US Gymnastics Board of Directors

The President and CEO, Steve Penny, was pushed out in 2017.

According to NBC News, “The organization, which selects the national and Olympic teams, is accused of trying to keep a lid on the scandal — waiting five weeks to alert the FBI to a gymnast’s complaint; failing to notify Michigan State University, where Nassar had a practice, that one of its doctors had been accused; and having Maroney sign a secrecy agreement as part of a settlement.”

USA Gymnastics seems to have known about the scandal and tried to save themselves. They seem most to blame for the continuing of the crisis.

The USOC has demanded a culture change within USA Gymnastics. They demanded a firing of the entire Board of Directors as well as training going forward. Aly Raisman, the gymnast who has been the most vocal and forward of the victims, said she believes the USOC was part of the problem. Alluding to the idea that they also knew and refused to do anything.

Klages retired in February of 2016 after being suspended for her support of Nassar after the claims were brought against him. She even went so far as to have the MSU gymnast write a card of condolences to Nassar when he was suspended and told an upset mother that “He could be framed”. Klages claimed to be close friends with Nassar.

Klages was at best willfully naive and at worst complicit in these wrongdoings. 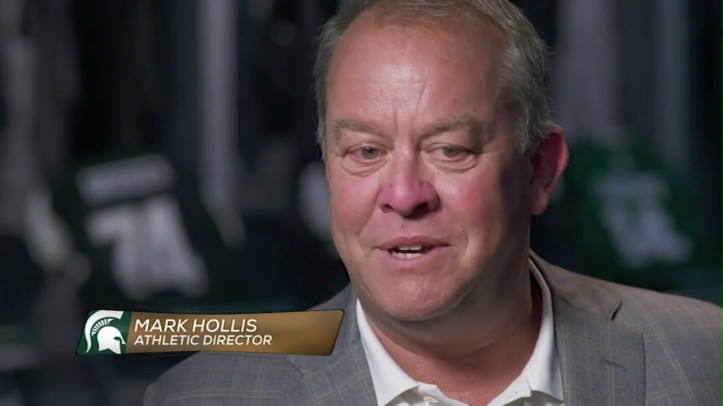 This seems to be a PR move. Again, an AD is responsible to some point for what happens in his department.

Simon resigned stating, “As tragedies are politicized, blame is inevitable. As president, it is only natural that I am the focus of the anger.”

She obviously does not find herself at fault. It is also a little hard to stretch the goings on of a doctor in the athletic department to the President. But when a scandal this wide hits your campus, holding on to your job is almost impossible.

A fellow doctor under Nassar who considered Nassar her mentor. She was asked by Nassar to remove certain files after Nassar was suspended. Lemmen initially did it but had second thoughts and turned over all the files.

The NCAA is investigating Michigan State

Texas Rangers are investigating the Karolyi Ranch in Texas

1997: The first accusations about Nassar are leveled and allegedly reported to Michigan State staffers. The common response is first leveled against victims, “He’s a world renowned doctor”.

April 2014: A patient filed a complaint against his treatment to Michigan State University. MSU consulted 3 osteopathic physicians. All 3 were friends of Nassar. All three legitimized his treatment, though they did express some reservations.

2015: Maggie Nichols, a member of the U.S. national gymnastics team, coach over hears her talking about Nassar’s treatment. The coach reports to USA Gymnastics.

August 2015: Nassar is fired by USAG. They did not notify Michigan State.