The ACC considers itself an elite basketball conference, and has since the 1950s. In fact, if you ask an ACC fan they’ll tell you they’ve been the premier basketball conference since it’s inception. Is this correct? If it’s not, when did the ACC actually earn the title “Elite”? We’re going to explore this subject, focusing in on the single most important game in their ascension to these lofty heights. The date was March 23, 1974.

Founded in May of 1953 the Atlantic Coast Conferences’ original members were Clemson, Duke, Maryland, North Carolina, North Carolina State, South Carolina, Virginia, and Wake Forrest. The conference’s first appearance in the Final Four was one of college basketball’s most famous teams, the undefeated National Champion North Carolina Tar Heels of 1957.

Going into the 1973-74 season, ACC advocates claimed that the ACC could take down UCLA if only UCLA would give them a shot. They would point to Duke’s two overwhelming wins over UCLA in the 1965-66 season as evidence of their superiority.

What they did not mention was the UCLA varsity team had recently lost big to the Bruin’s Freshman Team (led by Lew Alcindor) before the season began (75-60). During a time when freshmen were not allowed to play, that varsity team would go on to lose 8 games that season they lost to Duke. The 1965-66 UCLA team was the one team in ten that did not make the NCAA Tournament, or win the AAWU Championship. “As a group our little teams in the PAC 8 year in and year out would kick the ACC’s rear end.” bragged USC Coach Bob Boyd.

Well, in the 1973-74 season John Wooden and UCLA gave the ACC their opportunity. In the first three weeks of the season the ACC’s two best teams would get their crack at the 7-time defending champions. First Maryland, then North Carolina State took their best shot. On December 1st 1973 Maryland came in to Pauley Pavilion and stayed with the Bruins for the entire 40 minutes. UCLA held on for a 65-64 victory, but the narrowness of the margin gave great comfort to the ACC. N.C. State (the best team in the ACC) would surely handle the Bruins on a neutral court in St. Louis two weeks later. However, it didn’t happen. After keeping the game interesting in the first half, the Wolfpack had no answers for Bill Walton and Keith Wilkes in the 2nd half as the Bruins rolled to their 79th straight triumph, an easy 84-66 win.

The rest of the UCLA campaign was not so stellar. Their 88-game winning streak was snapped on January 19th, when they blew a big lead late and lost at Notre Dame,71-70.  Four weeks later they lost back to back games at Oregon State and at Oregon to fall to 18-3. This was unprecedented during the Bruins Championship run. UCLA had lost only 3 games in the last four years, only 5 in the last seven. North Carolina State went undefeated the rest of the way thus replacing the Bruins as the #1 team in the country. If UCLA was ever vulnerable, this sure seemed like the year. Add to that the Final Four was on Tobacco Road in Greensboro, North Carolina. UCLA Coach John Wooden didn’t seem too concerned. “I want North Carolina State to remember that we beat them by 18 points on a neutral court.” Wooden said. “I want them to think about who has a psychological advantage.”

This was the situation at tip-off on March 23, 1974 between the two teams ranked first and second in the country, before a highly partisan Wolpack sold-out crowd. The first half was very similar to the St. Louis meeting with the two teams exchanging the lead constantly resulting in a 35-35 halftime score. The second half began as another repeat of the earlier contest as UCLA surged to an eleven-point lead. Just as it seemed the route was on the Wolfpack ran off ten unanswered points to close to within one, and for the remaining eight minutes the teams traded the lead. On their final possession in regulation, North Carolina State’s Tim Stoodard missed a short jumper at the buzzer to force the teams into overtime.

The defenses dominated the first overtime with the only scoring being Tom Burleson’s spin move around Bill Walton for a 67-65 lead, followed by a 20-footer by the Bruin’s Guard Greg Lee that led to a second overtime. Surely UCLA would end it in the second overtime as Walton made two free throws, then hit a turnaround jump shot to put the Bruins up 71-67. The contest seemed decided again when Keith Wilkes hit a lay-up and was fouled by Burleson stretching the lead to 74-67.

But, suddenly the momentum changed. Monte Towe canned two free throws, after UCLA’s Tommy Curtis made 1 of 2 free throws. David Thompson made a spectacular tip in of his own missed shot to close it to 75-71. Burleson was fouled and sank 1 of 2 free throws. With just under a minute to go UCLA’s Dave Meyer missed the front end of a one and one, N.C. State went back to Thompson who hit a 15-foot bank shot to tie the score. Another UCLA miss was followed by two Thompson free throws and North Carolina State seized the lead. When Burleson stole a UCLA pass leading to two Monte Towe free throws the game was decided. Walton scored at the end, but the ACC had their victory, 80-77. As Sports Illustrated proclaimed on their cover “End of an ERA.”  Well not quite. 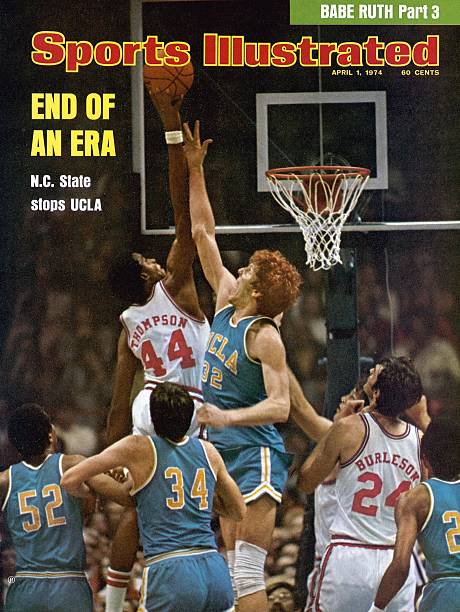 Of course, UCLA added one more title in Wooden’s final season in 1975. This put the PAC 8 ahead of the ACC in National Championships 13-2. Since then the ACC has steadily gained ground. It wasn’t until 1982 that the ACC won their next title. Dean Smith’s “Dream Team” of Michael Jordan, James Worthy and Sam Perkins edged Georgetown to claim Smith’s first Championship. N.C. State won an improbable Championship in 1983, then Duke won two in a row in 1990 and 1991. Interesting enough, with North Carolina’s win last year that allowed the original members of the ACC to tie the original schools in the Pac 8 in total championships, 14 to 14.

The turning point for both conferences is easily defined…March 23rd 1974!