The Toronto Maple Leafs came roaring into the 1942 Stanley Cup Final feeling invincible. They had just dispatched the regular season winner New York Rangers in six games. It was the first time Toronto had made it to the Finals in 10 years. There was only one team remaining to prevent them from winning Lord Stanley’s Cup. The lowly Detroit Red Wings who had finished a dismal 5th in the seven team league. Somehow the Wings had defeated the Montreal Canadiens and Boston Bruins in the first two rounds to earn the right to face the Maple Leafs.

In Toronto for Game 1, Detroit’s Don Grosso scored in the second minute to give the Red Wings an early lead, but John McCreedy tied it up at the 6:36 mark. At 12:30 still in the first period Grosso assisted on a goal by Sid Abel putting Detroit up 2-1. However the lead lasted for less than one minute before Sweeny Schriner tied things up again at 12:59.

The score remained 2-2 until Grosso’s second goal of the game propelled Detroit back to the front. Despite constant pressure, the Red Wings held on for a 3-2 win.

The Maple Leafs fans were stung by the Game 1 loss, but figured the home team would even things up in Game 2 again in Toronto. The Red Wings, again using the “dump and chase” tactic, dominated. Scoring twice in the first period and then rolling to a 4-2 triumph. Grosso tallied another two goals in a penalty filled physical game, decided in the corners. The Red Wings were up 2-0 with Games 3 and 4 in Detroit. Could this shoe in for the Maple Leafs turn into a sweep for the Red Wings?

Game 3 in Detroit was another “dump and chase” clinic by the Red Wings. Despite the Maple Leafs scoring the first two goals within a minute of each other at the 15:36 and 16:06 mark of the first period, Detroit immediately responded with two goals of their own at 18:20 and 18:40. These were the first of five straight Red Wing goals. In another penalty filled game the Red Wings muscled themselves to a convincing 5-2 victory. The Maple Leafs still had not won a game.

The Red Wings went for the improbable sweep in Detroit in Game 4. Before the game, Toronto Coach Hap Day replaced regulars Bucko McDonald and Gordie Drillon with Don Metz and Hank Goldup on the active roster. Don was the brother of fellow Leaf Nick Metz and was about to change everything.

Prospects looked good for the Red Wings early in Game 4. Detroit scored twice in the 2nd period to jump off to a 2-0 lead.  Suddenly Toronto came to life. Before the period was over Bob Davidson and Lorne Carr had scored for the Leafs to tie things up going into the 3rd. Carl Liscombe scored putting Detroit back in front five minutes into the final period, but the Red Wings couldn’t hold it. Two minutes later Leafs’ Captain Syl Apps retied it and Nick Metz scored the game winner with seven minutes left. Toronto had staved off elimination.

The game ended in total chaos. Detroit, not happy with the officiating drew two misconduct penalties in the final minutes. At the end, Detroit Coach Jack Adams physically assaulted the game referee, Mel Harwood. Harwood and NHL President Frank Calder had to be escorted out of the building by police. The result of the incident was that Detroit would be without their coach for the rest of the series, Adams was suspended indefinitely.

Red Wings Captain Ebbie Goodfellow took over coaching duties for Detroit in Game 5. Feeling fortunate still being in the series, the Maple Leafs took control early on two 1st period goals, and then netted five more in the second. Don Metz was huge, scoring three goals and assisting on two others as Toronto routed the Red Wings 9-3. This sent the teams back to Detroit with the Red Wings lead only 3 games to 2.

In Detroit for Game 6 Hall of Fame Goaltender Turk Broda was dominate for Toronto, but he had to be, as Detroit’s Johnny Mowers almost matched him. Don Metz again was pivotal, as he stole the puck deep in the Detroit Zone and then beat Mowers 14 seconds into the second frame to put Toronto in front. That would be the only goal until late in the 3rd period. In a rough, physical game the Leafs scored two late goals to even the series 3-3.

Game 7 was in Toronto, but it was no walkover. Before a record crowd of 16,218, it was the largest crowd to ever see a hockey game in Canada. Detroit survived being two men down in the scoreless first period, then struck early in the second frame on a picture perfect play from Sid Abel to Jimmy Orlando to Syd Howe who then beat Turk Broda  putting Detroit up 1-0. Toronto carried the lead into the 3rd period. About seven minutes into the period, just as Detroit was killing off another short-handed situation, Sweeney Schriner scored on a mad scramble in front of the net to tie the score. Two minutes later, on another fight in front of Johnny Mowers’ Net, Pete Langelle beat Mowers to put Toronto ahead for the first time. The Maple Leafs would dominate the rest of the game, Schriner scored again at 16:11 of the 3rd, and the Toronto Maple Leafs had an unprecedented championship.

There have been teams that have come back from 0-3 in professional playoff since. The New York Islanders in 1975 over the Pittsburg Penguins, The Philadelphia Flyers over the Boston Bruins in 2010, and the L.A. Kings downed the San Jose Sharks on their way to the 2014 Stanley Cup Championship. Only once has it happened in baseball, the Boston Red Sox overtook the New York Yankees in the American League Championship Series in 2004, but 1942 was the only time it has ever happened in a championship final.

Even though the Red Wings would win the Stanley Cup in 1943, the next decade would belong to the Maple Leafs, as they would win five of the next nine Cup Finals.

This year, the Maple Leafs made it back to the playoffs but could not get by the Boston Bruins into the second round. As Toronto dreams of “next year” we remember their most glorious hockey moment. 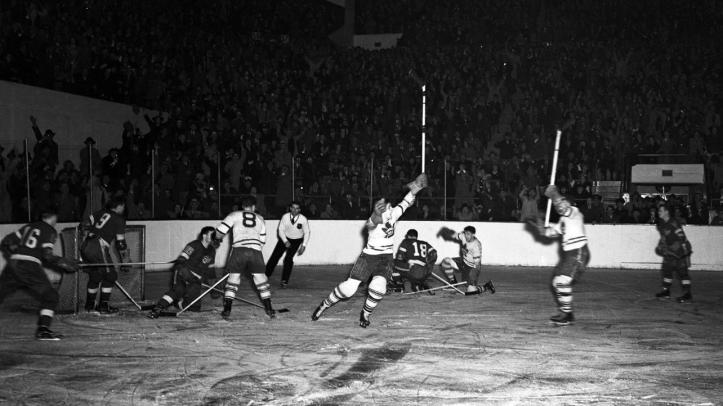