Stories You Should Know: 1961 Stanley Cup

Beginning in 1944 the Black Hawks were run by James Norris. Norris also owned the Detroit Red Wings, and he definitely favored the Wings. Between 1945 and 1956 the Black Hawks would only make the Stanley Cup Playoffs twice. They were the worst club in the NHL during those years. Starting in the late 50s things began to look up. Signing three young potential stars (Bobby Hull, Stan Mikita, and Pierre Pilot), then acquiring Glenn Hall and Ted Lindsay from Detroit, the Black Hawks had the nucleus of a great team. They made the playoffs in both 1959 and 1960, only to lose to eventual champs Montreal Canadiens in the first round.

In 1961 the National Hockey League consisted of only six teams. The Montreal Canadiens (92 Points), Toronto Maple Leafs (90), Chicago Black Hawks (75), Detroit Red Wings (66), New York Rangers (54), and Boston Bruins (43) finished the regular season in that order. The Playoffs consisted of the top four teams with the 1st place team facing the 3rd place team, 2nd playing 4th. This pitted the Canadiens against the Black Hawks, while the Maple Leafs played the Red Wings in the first round. In two monumental upsets, Detroit defeated Toronto (4-1) and Chicago knocked out the 5-time defending champions Montreal Canadiens (4-2) in Round One. It would be the first Stanley Cup Final since 1950 that both teams in the Stanley Cup represented American Cities.

In Game 1, the Black Hawks jumped out to 3-0 lead in first period. Goals by Bobby Hull, Kenny Wharram, and Hull drove Terry Sawchuk from net. With Hank Bassen in goal the Red Wings held Chicago scoreless in the 2nd and 3rd periods, but the damage was done. Despite a power play goal in the 2nd period by Len Lunde and a late goal in the 3rd period by Allan Johnson the Black Hawks won at home in Chicago 3-2.

Game 3 back in Chicago saw Glenn Hall dominate in Goal. The Hall of Famer was spectacular, making 35 saves, only beaten by Gordie Howe in the 3rd period. Fortunately for the Blackhawks they had already built a 3-0 lead on 2nd period goals by Stan Mikita, Ron Murphy, and Murray Balfour. Sid Abel again chose to leave Sawchuk on the bench, Bassen was OK, stopping 33 of 36 shots, but Hall was better in Chicago’s 3-1 win. Chicago had the 2-1 edge on the series.

Sawchuk was back in Goal for the Red Wings in Game 4 and the two great Goaltenders showed their stuff. After a scoreless 1st period, in a tense low scoring game, Bill Hay put Chicago ahead seven minutes into 2nd period, only to watch Alex Delvecchio tie the contest one minute later on a power play goal. The 1-1 score held until just under seven minutes left in 3rd period when Bruce MacGregor beat Glenn Hall with the game winner! Detroit had re-tied the series, 2-2.

Sawchuk and Hall were both back for Game 5 in Chicago, but it was a completely different contest. Two minutes into the game Leo Labine put Detroit in front. Chicago bounced back with back to back goals by Murray Balfour and Vic Stasiuk that lifted Chicago into the lead. Howie Glover pulled the Wings even at 15:35 on a Power Play Goal. Four goals in the 1st period were more than the entire Game 4 total. Balfour’s second score of game put Detroit back in front, but two minutes later Stasiuk beat Sawchuk again to re-tie game going in to 3rd period. Then the great Stan Mikita took over the game (read about Stan Mikita’s story here). Scoring two goals and assisting Pierre Pilote on a third the Black Hawks’ Center turned the game into a route. Final score was Chicago 6 Detroit 3.

The 6-goal onslaught drove Sawchuck out of series (he was injured). Back at home Sid Abel chose Hank Bassen to patrol the nets for the Red Wing for Game 6. After the 1st period the decision looked like a good choice. Bassen held Chicago scoreless while Parker MacDonald put Detroit ahead 1-0 at the 15:24 mark. Only Glenn Hall kept Chicago in the game. When early in 2nd period Red Wings gained a one-man advantage Detroit pushed to expand their lead. Suddenly Chicago’s Reggie Fleming stole the puck, controlled the puck for the length of the rink and beat Hank Bassen with a shorthanded goal. The game completely changed.

Bobby Hull observed “Reggie stealing the puck and scoring kind of neutralized that power play. The momentum came back to our club and Detroit after, you could just see them sag after that and we played the rest of the game out skating them at every turn.” The Black Hawks put mounting pressure on Bassen, finally beating him on Ab Mcdonald’s score off a rebound of a shot by Bobby Hull. The Black Hawks led 2-1 entering 3rd period. Eric Nesterenko scored on a 2 on 1 rush 57 seconds into the period and the route was on. Jack “Tex” Evans scored his first goal of the year five minutes later, then Kenny Wharram closed the scoring on a break away at 18:00 minute mark. The Chicago Blackhawks were Stanley Cup Champions!

Glenn Hall is on the short list of the Greatest Goaltender of All-Time (coincidentally along with Terry Sawchuck). He was voted the best Goalie in the NHL a record 7 times. His record of 502 consecutive complete games is a record that has never been approached. Since Bobby Hull was 22 and Stan Mikita 20 at the time of the triumph, it seemed their Stanley Cup Championships were only just beginning. It turned out that 1961 would be the Bobby Hull, Stan Mikita, Glenn Hall Black Hawks only Championship. They would continue to be among the elite teams in the NHL until Hull fled to the WHA in 1972. Hull would win the Hart Trophy (NHL MVP) in 1965 and 1966. He was followed by Stan Mikita in 1967. They just couldn’t get by the Montreal Canadiens and Toronto Maple Leafs to lift the trophy. 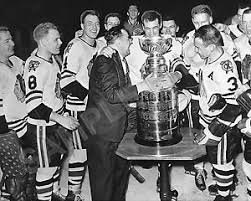