The Overton Window in Sports

Yes…there he is, that old Celtic Kevin McHale at the Town Cult Meeting in Duluth. He’ll be signing MAGA hats later at the cross burning… pic.twitter.com/Eqpp4JMf6T

There is a phrase that has popped up over and over again in the last 18 months since a reality T.V. star defeated Hillary Clinton for the presidency. That phrase is the Overton Window, it’s also known as the Window of Discourse.

The origination of this phrase was by Joseph P. Overton of the Mackinac Center of Public Policy. In his theory he described what ideas were viable and what is acceptable speech for public discussion and what is not. On each side of the political spectrum there are the fringe elements, the Alt-Right on the Republican side and ANTIFA on the Democratic side of the aisle. Both of these are generally spit out of common acceptance by their respective parties.

But what happens with those that are extreme? Or what is the definition of extreme anymore?

Now in politics this is a way more volatile and nuanced debate. But in sports the answer ought to be clear cut, but it is far, far from that.

Remember all the way back to 2016, when Lebron James and fellow Cleveland Cavalier teammates campaigned in their home state of Ohio for Democratic Nominee Hillary Clinton? He appeared at rallies. He actively worked to use his influence as the biggest sports superstar in the United States and Ohio to help win an election.

Where does this fall in the Overton Window?

With the options being unthinkable, radical, sensible, popular or policy this seems to lie squarely in the “Sensible” category.

In no way does this cross the bounds of moral outrage.

Now we come to our current situation, Kevin McHale dared to show his face at a Make America Great Again Rally in Minnesota. As you can see from the above Tweets, we have obviously expanded outside the Overton Window, correct?

Only an insane person would find what Kevin McHale did more inappropriate than what Lebron James did. James used his name and his position to actively campaign for a candidate.

Kevin McHale stood in the crowd of the President of the United State’s rally. He used neither his famous name nor his position to actively change opinions. Yet he is seen as “Radical”.

How has the Overton Window shifted so much? Well it starts and ends with rhetoric that is unbecoming of our Republic. Sure it started with a blustery, reality TV star and it propelled him to the presidency.

Now it has hit even more unfavorable realms with the shaming of former athletes and their families for their political beliefs. Denying dinner to the US Press Secretary. Harassing other government officials as they eat dinner. Shooting U.S. Congressmen for their political party. The calling of current Congresswoman to continue such actions against their political opponents.

When you start describing your political opponents are NAZI’s without a proper understanding of the word, well that is how you get there. When you project the worst characteristics you have come to define your opposition onto everyday people who happen to vote different than you, that is how you distort the Overton Window.

“MAGA” to some represents less regulations, a freer economy, enforced borders and more freedom of speech. But “MAGA” has been defined by others as “racists garbage people” where the KKK has full power again. Which one of these definitions lies outside the Overton Window? Which one has become the mainstream view? Both of those answers is the later. And that is a problem. Because the “Radical” version does not represent every person who votes for Trump.

The first definition of MAGA lies easily in “Sensible” category, and since it won Trump the presidency and has become policy in many instances, MAGA and Trump Rally’s ought to be categorized as “Popular” or “Policy”. Yet instead it is treated as “Radical” by those that disagree with it. Why? It makes it much easier to justify violence and the shutting down of speech if you define the opponent as “Radical” instead of “Popular” or even “Sensible”.

Is the state of American political rhetoric in a bad place. Yes. Can the sporting world be the place of healing, YES!

Let Kevin McHale be a Trump-fan. There are lots of them in the country who hate racism and who want to see America and their fellow Americans succeed. The majority of Trump fans find the Alt-Right as reprehensible as liberals do. Don’t define them by their fringes. In the same way Democrats should not be defined by the violence of ANTIFA. 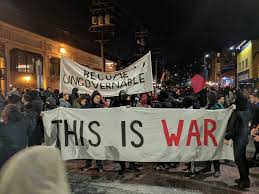 Let Lebron James put his time and talents into the Clinton campaign. Let him criticize the President of the United States all he wants. But rally behind him if he plays for your team or plays the game you like.

Cheer on your team and your players not because their political opinions align with you or don’t. Do it because America is about more than defining each other by political partisanship.