TIGER WINS! TIGER WINS! It’s the most important win in golf history. Never has a golfer accomplished a more significant win than Tiger’s win this weekend.

February, 1973: 42 year old Arnold Palmer (the most beloved golfer in history) closed out a 2-stroke victory at the Bob Hope Desert Classic in what would be his 62nd PGA Tour championship. It was his first win in nearly two years. It was a strong field, Jack Nicklaus and Johnny Miller tied for second. Palmer would continue to be competitive for a few more years, he even led the U.S. Open late on Sunday that June before Miller blew by him on that historic day, but Arnie would never win again.

April 1978: 42 year old Gary Player completes a 1-stroke victory in the Houston Open. This was “The Black Knights” 3rd straight PGA Tour win. It garnered a Sports Illustrated Cover story, he was also on the cover two weeks earlier when he won the Masters with a final round 64. He wouldn’t win again on the PGA Tour.

May 1982: 42 year old Jack Nicklaus cruises to a 3-stroke victory at the Colonial Invitational. It was his first win since his PGA Championship in 1980.  Jack’s future? Two more Tour wins, including the 1986 Masters.

February 1994: Johnny Miller staggers home with a final round 74 at Pebble Beach, but manages to hold on for a 1-stroke victory over Tom Watson. Miller hadn’t won in seven years, It would be his last PGA Tour win. He was 46.

So Tiger’s win is not unique in any way. We could find many more such stories in PGA history.

Whereas the story of Books Koepka after his PGA Championship win this year, could place him in the phenom category. His feat was only completed by the greatest players of all time; Young Tom Morris, Harry Vardon, Bobby Jones, Walter Hagen, Gene Sarazen, Ben Hogan, Arnold Palmer, Jack Nicklaus, Lee Trevino, Tom Watson, and Tiger Woods. The Who’s Who of Golf History. That Koepka’s won 3 out of 6 consecutively played majors was totally overshadowed by the man who finished 2nd. You would think that the sports media would celebrate this achievement and start speculating on if Koepka’s on the verge of greatness. But no, all the sports media could focus on was the man who finished 2nd, two strokes behind the 29 year old champion. Koepka, who never lost the lead on Sunday, and though it wasn’t a blow-out, seemed in control of the tournament his entire round was upstaged by the man who finished 2nd, one Tiger Woods.

Now Tiger has finally won. It’s the comeback story of the ages. A year ago he was pulled over for drunk driving completely out of it because of the pain medications from his various surgeries. Last year he could not tie his own shoes. This Sunday, he was back with the trophy as he won the Tour Championship. It was a solid tournament for Tiger who led most of the tournament with the likes of Justin Rose and Rory McIlroy on his heels.

But what does this win really mean? Is Tiger back?

Well, if back means winning a tournament again, yes he’s back.

But if Tiger is still chasing Greatest of All Time. No, I don’t think he’s back. And here’s why:

There are two records Tiger is chasing to be considered the GOAT. The first and most important is Jack Nicklaus’ career Major Championships, which is 18. Tiger has 14.

The other record is most PGA Tour wins, 82, held by Sam Snead. With Tiger’s win this weekend he now has 80.

Let’s deal with the record that he has almost no chance to surpass first, Nicklaus’ 18 Major Championships. Woods will be 43 when he competes in his next Major, the 2019 Masters. Here’s a list of the Major Champion winners who were 43 years or older:

That’s 14 times a player 43 years or older has won a Major Championship. Two of them won two after age 43, Old Tom Morris in the 1860s and Julius Boros one hundred years later in the 1960s. Tiger Woods needs 5 more Majors to pass Nicklaus. Jack won only one Major Title after his 43rd birthday.

Lets see how far back we have to go to get to Jack’s last five majors. As already noted he won The Masters at 46, he won both the U.S. Open and PGA at age 40, The Open Championship at 38, and the PGA at 35. It’s interesting to note that Jack Nicklaus won the career Grand Slam after the age of 38, an incredible achievement. When Sports Illustrated wrote an article about Tiger it emphasised that Tiger is different than Jack because he was competitive this year in two of the 4 Majors.  But it must be remembered that Jack finished a close 2nd in the PGA at age 43 (one stroke behind Hall Sutton), and also 2nd in his heartbreaking loss to Tom Watson in the 1982 U.S. Open at Pebble Beach. It is interesting to note that neither of these tournaments was Jack’s finish the story after the event. Tom Watson and Hal Sutton were the stories (how sports journalism has changed).

Tiger is a very unique and dynamic talent, but he is still five Majors short of Nicklaus. The chances that he wins one more Major from now on is probably less than 50-50. He hasn’t won one since he was 32.

What about the other greats outside of Nicklaus that Tiger can look it?

Ben Hogan won his 9th and final major at 40

Tom Watson his 8th and final at 33

Arnold Palmer 7th and last he was 34,

This is a list of the greatest Major Champions of all time (Bobby Jones is not included on this list because he quit playing competitive golf at 30), and only two (Nicklaus and Vardon) won Majors after their 43rd birthdays, with both winning only one.

Conclusion: Tiger may win one more Major, possibly two, but we can safely put Tiger’s chances of winning five more Majors at less than 1%.

So if someone is saying something different, they are either delusional or an idiot.

Now let’s concentrate on a much more attainable goal…Sam Snead’s record of 82 career PGA Tour wins. First we must clarify that Snead’s total of 82 tour wins is not universally accepted. His career win total ranges from 88 to 69 based on what was considered an official event during Snead’s career. We’ll use 82 because that’s what the PGA Tour uses. Tiger now has 80, two behind “Slammin’” Sammy. 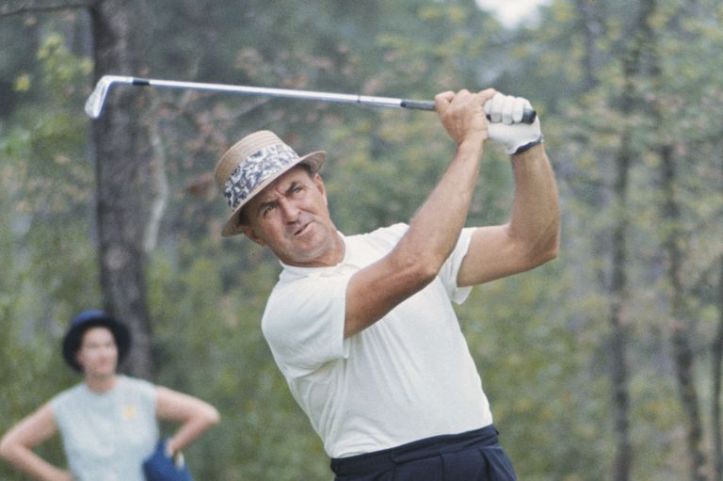 Woods needs three wins to obtain the record. What is the historical record of the other top winners for Tour wins after their 43rd birthday? Snead won 11 events after turning 43 (his last in 1965 at 52, the oldest player to win a PGA event).

Jack Nicklaus is next with 73, his last career win was the 1986 Masters, one of two wins after his 43rd birthday.

Byron Nelson and Billy Casper are the only other players to win more than 50 events; Nelson is not a fair measure because he quit playing a full schedule at age 34. Caspers won once after 43.

There are some player who did have significant success after 43.

Dutch Harrison did it six times in the 1950s,

What about Phil Mickelson? He has won twice since turning 43, including one Major. Since Phil is still playing, and is still competitive, this number may increase.

So Tiger needs three, it’s obviously doable, but what are the chances? About 50-50. If he stays healthy and continues to play at a competitive level, his best case scenario is between 5-10 Tour wins and two Majors. On the other hand, if he gets hurt again, or loses interest, his current total will be his final total.

This weekend was a great win for Tiger. But he still stands firmly behind Jack Nicklaus as the Greatest Golfer of All-Time, and we think that’s where he will stay, behind Jack.