Stories You Should Know: Goose Goslin

From 1921 to 1939 two franchises won all but five American League pennants. Those two teams were The New York Yankees and Philadelphia Athletics. They won every title except 1924, 1925, 1933, 1934, and 1935. Those five exceptions have one thing in common, the same man playing left field.

Leon Allen “Goose” Goslin was born in Salem, New Jersey in October of 1900. He was a baseball fanatic at an early age, starring in sandlot leagues, before signing with the Semi-Pro Salem All Stars for $3 a day at age 16. As a pitcher, he dominated the league leading to a promotion to the Columbia, South Carolina, Comers of the Class C Sally League. Let’s quote Goslin himself about how that worked out, “That was 1920 and I was twenty years old. Well, it turned out that professional ball was a little different from sandlot ball. Around here I used to be quite a pitcher. That’s what I thought, anyway. Used to strike ‘em out one after the other. But down there it seemed like the harder I threw the ball the harder they hit it.”

His manager agreed and Goslin was quickly shifted to the outfield. In 1921 “Goose” hit .390 and before the end of the season he was signed by the Washington Senators.  It was about this time that he acquired the name he would be known as for the rest of his life, “Goose” because of the way he ran (with his arms flapping) and his long neck and big nose. And he loved the game;

“Heck, let’s face it, I was just a big ol’ country boy havin’ the time of his life. It was all a lark to me, just a joy ride. Never feared a thing, never got nervous, just a big country kid from New Jersey, too dumb to know better.” Quoted from “The Glory of Their Times”

Goslin became the regular left fielder for the Senators in 1922 and for the next seven years was among the best hitters in baseball. This is sometimes misunderstood, because Washington’s Griffith Stadium was the worst hitters park in baseball. From 1922 to 1929 Goslin hit 104 home runs, 82 on the road and only 22 at home.

In 1924 the Washington Senators won their first American League Pennant, with the “Goose” hitting .344 and leading the league with 129 RBI. In a thrilling seven game World Series with the New York Giants, the Senators would win their only World Series Title led by Goslin’s 3 home runs, 7 RBI and .344 batting average.

1925 saw the Senators repeat as American League Champions, but they blew a 3-1 lead to lose in seven games to the Pittsburgh Pirates in another tense hard fought series. These Washington teams were led by the aging Walter Johnson, and also included Hall of Famers Bucky Harris and Sam Rice, but the best player on the team was “Goose” Goslin.

Goslin continued to be one of the best hitters in baseball. In 1928 he had his best opportunity to win a batting title. Entering the final game of the season he was only a fraction of a point ahead of the St. Louis Brown’s Heinie Manush. It so happened that the Browns were playing the Senators, with Manush playing left field for the Browns and Goslin patrolling left for the Senators. It came down to Goslin’s final at bat in the 9th inning. We’ll let “Goose” describe the event; “His average is .378 and mine is .378 and a fraction. If I get up and don’t get a hit  I’ll drop below him. I had the information before I went to bat. Gee I didn’t know what to do. Bucky Harris left it up to me. He was the manager. Well, I’ve never won a batting title and I sure would love to, just for once in my life. So I think I’ll stay right here on the bench.”

Then Washington’s first baseman Joe Judge spoke up; “You better watch out, or they’ll call you yellow.”

So his teammates shamed him into batting. Goose continues with the story; “And doggone if that pitcher didn’t get two quick strikes on me before I could even set in the batter’s box. I never took my bat off my shoulder, and already the count was two strikes and no balls…Well I didn’t know what to do. Then it came to me, get thrown out of the ballgame!”

The Umpire was Bill Guthrie, ‘Why, those pitches weren’t even close,” Goslin bellowed.

Guthrie’s response was to the point, “Listen wise guy, there’s no such thing as close or not close.”

“Oh, did that ever get me mad (I acted like). I called him every name in the book, I stepped on his toes, I pushed him, I did everything.”

The Umpired saw through the tirade, “OK, are you ready to bat now? You’re not going to be thrown out of this ballgame no matter what you do, so you might as well get up to the plate.”

“I heard him. And gee you know, I got a lucky hit.” and  won the batting title! (Quoted from “The Glory of Their Times”).

Despite the continued production of Goslin, due to the fading effectiveness of Walter Johnson and the rise of the Babe Ruth, Lou Gehrig Yankees, the Senators fell out of contention in the American League. Washington owner Clark Griffith, always concerned about making money, traded the “Goose” to the St. Louis Browns in 1929, for of all people Heinie Manush. In St. Louis, in a ballpark that favored hitters, Goslin put up his best numbers.

In December of 1932 Griffith again purchased Goslin in a trade with the Browns, and by pure coincidence the Senators surged to another pennant. This would be the third and last pennant won by the Washington Senators. Despite losing the World Series in five games, Goslin played every inning, making him the only player to play every inning the Washington Senators ever played in the World Series. Despite this fact, Griffith again traded Goslin after the season, this time to the Detroit Tigers. 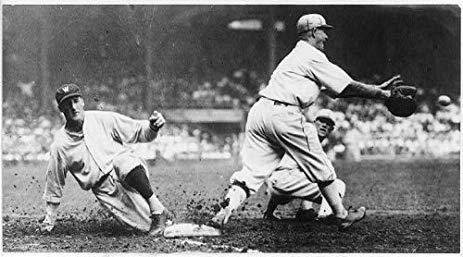 The 1934-1935 Detroit Tigers are one of the most forgotten great teams. One half of their eight regular players would be elected to the Hall of Fame, and these weren’t marginal Hall of Famers, but no brainer selections. First Baseman Hank Greenberg, second baseman Charlie Gehringer, catcher Mickey Cochrane, and left fielder “Goose” Goslin.

In 1934 the Tigers would lose a memorable seven game series to St. Louis’ famous “Gashouse Gang”. In 1935 they would come back to win the World Series over the Chicago Cubs. With the Tigers up 3-2 in games, Goslin batted with Cochrane on 2nd base and one out in a 3-3 tie in the bottom of the 9th. He drove a single to center for the walk-off hit that ended the World Series.

Goslin remained with Detroit until 1938, when he returned to the Senators for his last season. He wouldn’t be elected to the Hall of Fame until 1968, three years before he would pass away at age 71.

We’ll let the “Goose” sum up his career;

“Why, I never even realized it was supposed to be big doin’s. It was just a game, that’s all it was. They didn’t have to pay me. I’d have paid them to let me play. Listen, the truth is it was more than fun. It was heaven.” Quoted from “The Glory of Their Times”.