Stories You Should Know: Bob Pettit

Bob decided to stay close to home for college, attending Louisiana State University (LSU). Since freshman were not allowed to play varsity ball at the time, Pettit’s varsity career at LSU was from 1952-1954. In 1952 he led the SEC in scoring at 25.1 PPG and averaged 13.1 rebounds per game, earning all-SEC first team honors. He exploded on the national scene in 1953, becoming a First Team All-American and guiding the LSU Tigers to their first Final Four appearance. 1954 saw Pettit climb to another level, becoming only the second cager to average over 30 PPG (31.4) and pulling down 17.3 rebounds a game. LSU would finish in a tie with Kentucky for the SEC title, but would lose the playoff game with the Wildcats, preventing them from participating in the NCAA Tournament. [Just a note; between 1945 and 1955, only once did Kentucky not win the SEC Championship. That would be 1953, when Bob Pettit led the LSU Tigers to the Championship.] 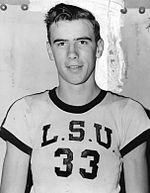 The NBA then came calling, selected 2nd overall in the 1954 NBA draft by the Milwaukie Hawks Bob signed for $11,000, an unheard of number for a rookie up to that time. Hawk’s coach Red Holzman immediately switched his young center to strong forward, forcing Pettit to adjust his game.

“In college I played the standing pivot, my back was to the basket. In the pros , I’m always outside. Everything I do is facing the basket. That was my chief difficulty in adjusting. The fact that I never played forward before.” (April, 1957 issue of Sport Magazine) His adjustment was swift and devastating. He averaged 20.4 points and 13.8 rebounds his rookie year, becoming only the second rookie to earn All-NBA First Team honors.

The Hawks moved to St. Louis prior to the 1955-1956 season and Pettit began his run as the premier forward in the game. The NBA instituted the 24-second clock in 1955 and scoring exploded. The average team scored 79.5 points in 1954-55, then 93.1 in 1955-56. Pettit’s ability to hit medium range shots and crash the offensive boards was perfect for the new rules. He led the league in scoring (25.7) and rebounding (16.2). He was voted MVP of the 1956 NBA All-Star Game (the first of four), scoring 20 points, with 24 rebounds and 7 assists. He would be selected as the first recipient of the NBA MVP Award. He explained his success. “Offensive rebounds were worth 8 to 12 points a night to me. Then I would get another 8 to 10 at the free throw line. All I had to do was make a few jump shots and I was on my way to a good night.” He was the best player in the league, but things were about to change. 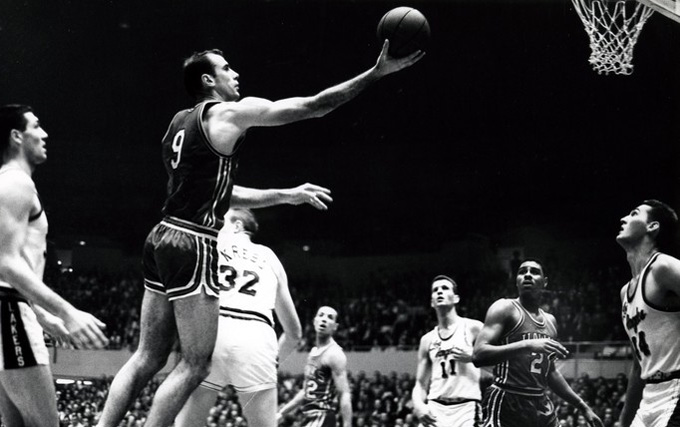 In an effort to build the Hawks into a NBA Champion, St. Louis made a bold move prior to the 1956-57 season. They acquired Hall of Fame guard “Easy” Ed Macauley and rookie Cliff Hagan (also in the Basketball Hall of Fame) from the Boston Celtics for draft rights to a center, out of the University of San Francisco, named Bill Russell. This would lead to one of the great rivalries ever in the NBA. The Celtics vs the Hawks, and Bob Pettit vs Bill Russell. Four of the next five years saw the Celtics play the Hawks for the NBA Title. 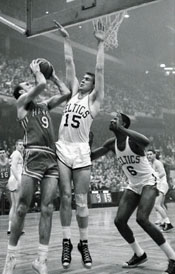 In 1957 Pettit led the underdog Hawks as they took the mighty Celtics to a seventh game. In what many call the greatest game in NBA History, Bob scored 39 points, pulled down 19 rebounds, while also canning two free throws in the final seconds of regulation sending the game into overtime. The Celtics would prevail in two overtimes, 129-127. This was only the beginning. 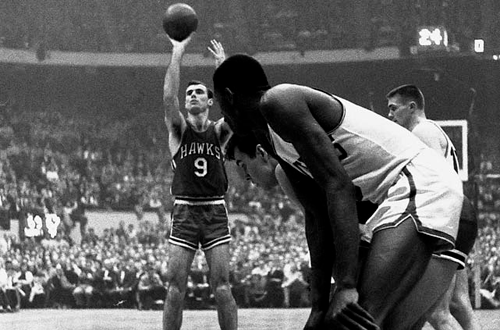 1958 saw the same two teams battle for the Title. This time the series would go six games, with Bob Pettit pouring in 50 points in Game 6 (a record at the time) in the Hawks thrilling 110-109 series clinching triumph (Russell was hurt and would only play 20 minutes). This would be the only time, in the Bill Russell era, that the Celtics would lose a NBA Final (for a fuller look at Russell’s amazing Game 7’s click here). The two teams would again meet in the Finals in 1960 and 1961. The Celtics would win another 7-game Series in 1960, then only take five games to dispatch St. Louis in 1961. These would be Pettit’s last NBA Final appearances. He would retire following the 1965 season, that being the only campaign where he was not named to the All-NBA first team (he was a 2nd team selection that year).

When Bob Pettit ended his career after 11 seasons in 1965, he was the all-time leading scorer in NBA History, He was the second leading rebounder in the history of the league. He is currently 8th in Average Points per game, with a career 26.36 average. He is currently 3rd in average rebounds per game at 16.22 (behind Wilt Chamberlain and Bill Russell). He was first team all-NBA in 10 of his 11 seasons. He won a 2nd MVP award in 1959. The question comes up, why is Pettit largely forgotten today?

So the question now is, how good was Bob Pettit? Was he the greatest forward of all time?

Let’s compare his numbers to the other contenders:

Stat wise, only Lebron James betters Pettit, as for helping his team win championships you must remember that Pettit only played 11 seasons, so his 4 Final appearances is not as low as it seems.

On the down side; when Pettit entered the league the game did not have anywhere near the athletes that would come along later. He only had an 11 year career.

Answering the first complaint; at the time he retired he was competing against Chamberlain, Russell, Oscar Robertson, Elgin Baylor, and Jerry West. These are players who are consistently rated in the Top 20 of all time (See where we rate them all here). As for the 2nd, there was not much money to be made for players in the NBA in the 1960s. Pettit went into banking after his playing days ended. He did very well, culminating in owning his own financial consulting firm, from which he retired in 2006.

Is Bob Pettit the greatest forward of all time?   No; Lebron James is clearly better, but as for the other forwards listed… Pettit is in the argument. Let’s keep him in the discussion. But most importantly lets remember him.